Beetroot soup, similar to the borscht in this post, was the first thing I cooked for Cath (aka The Messy Cook!).

Friends have told me that they are scared of cooking for me because I cook well therefore expect me to be a harsh judge. I didn’t really understand this until it came to cooking for someone who has her own supper club! I hope I’m not a harsh judge, though it is flattering that my friends think my cooking is good enough that I may be.

The Origins of Borscht:

There is a lot of disagreement on the internet about exactly what constitutes borscht. It might be vegetarian, but more likely it will contain meat. It is usually served hot, although some versions are served cold.

Its origins might be from any one of a number of Eastern European countries, with Poland and Lithuania probably having the strongest claims. It might be spelt barszcz, borsch, or barščiai. A definitive recipe is clearly impossible. Even within this, mine is inauthentic for, at the very least, the use of white miso paste, which is my current go-to for a savoury stock base.

It’s all about the stock! 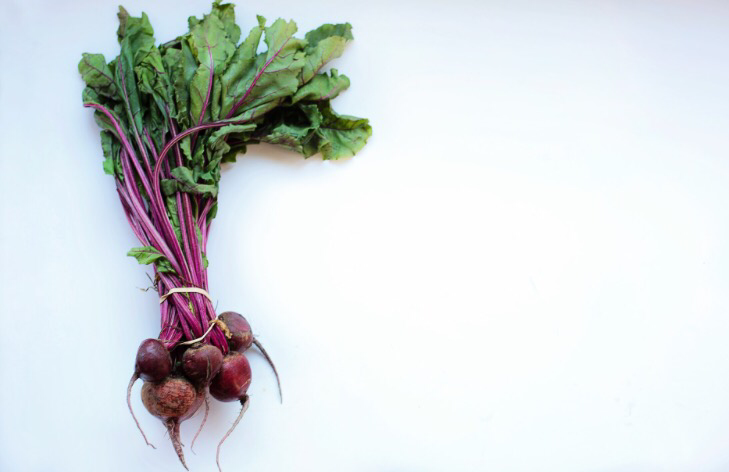 A key ingredient in this recipe is fermented beetroot juice. This is something found in Eastern European grocers, of which there are a number within a mile or so of where I live in Leeds. It’s available in small bottles of concentrated stock, and larger cartons of actual-strength stock (the cartons I have seen contain other ingredients too).

The fermentation makes the stock sour. I guess you could substitute with beetroot juice (fairly readily available in supermarkets, though not generally cheap), and increase the vinegar in the recipe. There are recipes on the internet for making it yourself.

The photos below are from a recipe test I did at Cath’s, to feed seven people. There was enough left over that I think I made enough for twelve! The cabbage I used was a green-white cabbage with fairly thin leaves, but harder white cabbage or red cabbage would work just as well, though may need cooking a little longer. 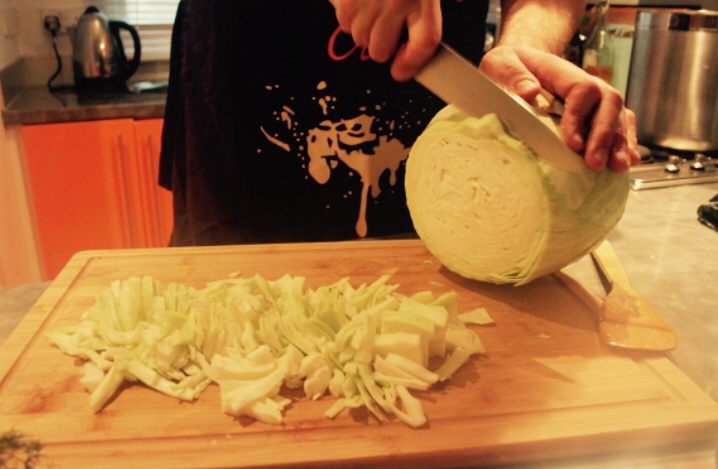 The recipe below is adapted from the test soup, tweaked to improve it, and scaled down to feed four as a main course or six as a starter (any leftovers will keep in the fridge for a few days).

Ingredients for the Soup:

– 400g cabbage (a third to a half a small cabbage, or less than a quarter of a mammoth beast like the one on the photos)

– 330ml concentrated beetroot stock this is the most common bottle size in the shops near me. You may not need it all, depending on how beetrooty you want the soup)

– A rounded dessertspoon white miso paste (if you don’t have miso paste, you could make the hot water from the recipe into a light vegetable stock with a bit of bouillon powder, or you could even add a dessertspoon of soy sauce) 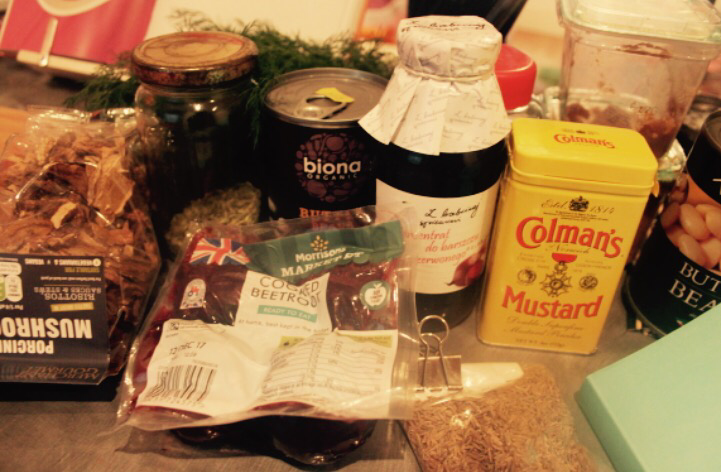 Ingredients for the Dumplings:

– 4 dessertspoons olive oil (or whatever oil  you have to hand)

1) Put the porcini in a mug, tearing any large slices into smaller pieces, and fill with hot water, and leave to soak.

2) Thinly slice the onion and fennel. Roughly crush and chop the garlic. Over a low heat, gently sautee the vegetables with the caraway seed and a pinch of salt for around 15 minutes until starting to soften and the onions are turning translucent. Use a fairly wide pan so that when the dumplings are cooking they are not too crowded. 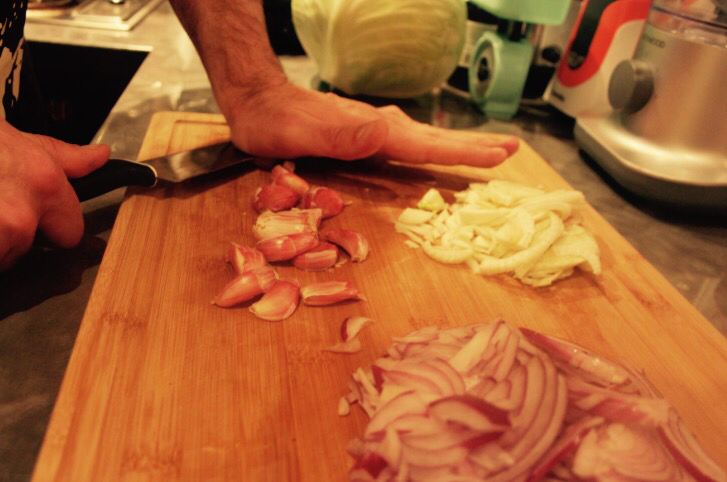 3) Chop the cabbage into short strips, about a centimetre wide and up to five centimetres long. Add to the pan along with the allspice and plenty of freshly-ground black pepper and turn the heat up to medium high. Sautee for a further 10 minutes or so until the cabbage is starting to soften and turn translucent at the edges.

4) Mix the flour, mustard powder and a level teaspoon of salt in a large bowl, then mix in the dill.

5) Make a well in the middle of the mix and add the oil and three dessertspoons of milk. Mix, sprinkling over more milk a teaspoon at a time until it comes together as a fairly dry dough (don’t use too much milk or it will be sticky). After an initial mixing with a spoon, it’s easiest to knead with your hand. Don’t overwork the dough: as soon as it comes together, leave it to rest, covered with a layer of cling film to stop it drying out.

6) Scoop the mushrooms out of the mug and add to the pan, then pour in the water from the mug. A small amount of grit will collect at the bottom, so pour gently and leave a spoonful or two in the mug at the end where the grit has collected. Add another mug and a half of boiling water, the miso paste, two-thirds of the beetroot stock and the vinegar. Bring to a boil, then turn down and simmer for around 25 minutes with a lid on.

7) Divide the dumpling dough into twelve pieces and roll into balls. These should be ready for when the soup has had the above 25 minutes. Allow ten minutes and you should be more than ready. 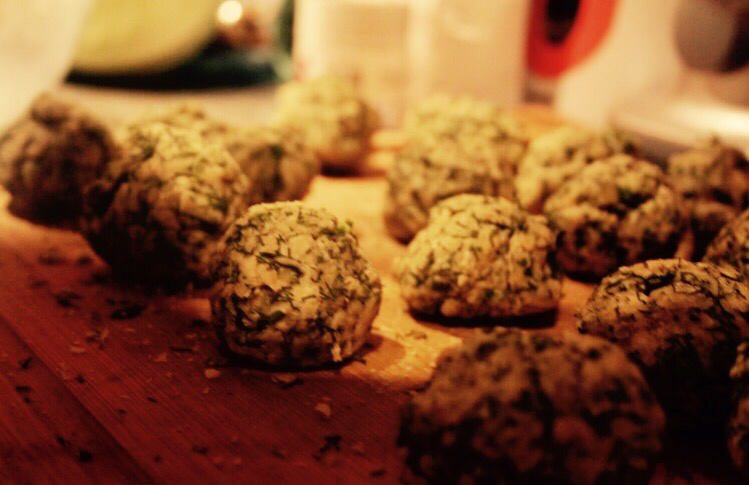 8) Dice the beetroot into roughly 1cm pieces. Add the beetroot and any liquid from the pack to the soup along with the beans with the water from the tin, and stir. Taste and add salt, vinegar, some or all of the remaining beetroot stock, and black pepper as you feel it needs: the beetroot stock will make the soup richer if it tastes a bit thin; remember the soup will reduce a bit before you eat it and become a little saltier, so err on the side of caution. The cabbage should still have just a bit of bite – if it is still hard, turn the heat up to medium high and cook with the lid on for another 5 minutes.

9) Gently drop the dumplings in the soup in a single layer and put the lid back on. Simmer for a further 25 minutes over a medium-low heat. Check once or twice that the soup is not getting too dry, add a little boiling water if needed to keep things soupy rather than being a thicker, drier stew. 10) Serve the borscht in bowls, garnished if you wish with a little sour cream or horseradish sauce, and a sprinkling of chopped dill. The soup I made for Cath was garnished with a little thinly sliced onion that had been lightly pickled in vinegar and salt for an hour or so.

Thanks Thomas for sharing your delicious, well experimented recipe with us. This borscht is perfect for those cold autumn nights. It reminds me a little bit of a local cabbage soup that I had in Prague earlier this year, in this soup the plum gave the dish some sweetness as the beetroot does in the borscht.

Thomas is due to launch his own food blog soon and I’ll be sure to share the details of his website with you all. He will also be in action at my next supper club in January, which will be my first vegan one. More to follow shortly on this of course!