We had been pre-warned about the freezing temperatures, but nothing can quite prepare you for the -25 oC nightly exposure that Harbin offers its visitors in mid-winter. It made the average day time temperatures of -10 oC seem pleasantly mild! Without this extreme weather however we would not had experienced the amazing Harbin Ice Festival.

The city of Harbin, home to a population of just over 10 million, was basically built by the Russian’s at the end of the 19th Century. You could see this Russian influence in abundance as you walked around town, with the Orthodox looking churches and buildings.

One of the main attractions was the International Snow Sculpture Art Exhibition over on Sun Island (Tai Yang Dao). The Ice and Snow sculptures were simply beautiful with exquisite detail, some which had taken months to make, some which were the size of buildings.

We had got a taxi over to Sun Island from downtown Harbin but walked back to the city over the River Songhua. The ice was that thick that there were all sorts of winter activities going on from ice skating to sledging.

At night we headed to the Ice and Snow world situated on the north bank of the Songhua River, where more ice sculptures lit up the cold skies. The Igloo bar provided not just a welcomed Blueberry Wine, which was almost like port in consistency, but well needed shelter from the extremities. You felt brave enough to venture back outside after a few glasses of this inside you!

The food here was very different from that in other areas of China I had visited, but it was just as tasty, with less spice being replaced by more richness with many potato and sausages based recipes. From a street vender I tried a pancake which consisted of spring onion, sausage and egg. Well-seasoned I went back for more, before being drawn towards the next vender selling various meats and seafood on kebab sticks. These too were delicious. I tried the chicken and pork kebabs which were lightly spiced with cumin and turmeric. 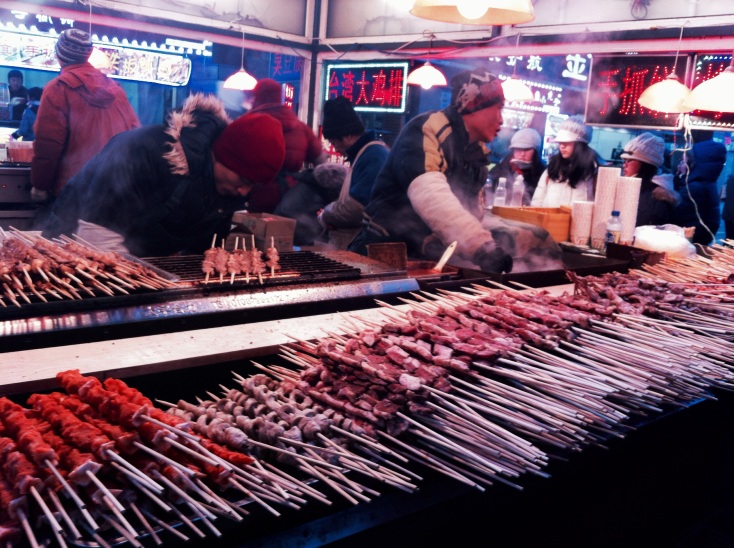 Three 3 days was enough time to spend being exposed to Harbin’s climate, but I was really glad that I visited this culturally interesting city and got to enjoy its culinary delights.